A set of serious Workers Comp claims always happen with an arctic cold blast – even when not expected at our HQ.  The lateness of this article and last week’s newsletter will attest to how difficult the recent East Coast storm – snow cyclone bomb – can be to travel and WC claims. 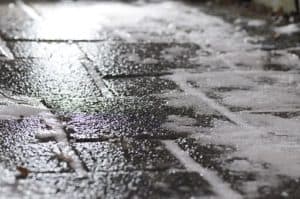 Some of the most serious workers comp claims have nothing to do directly with the exposure to cold weather.  These types of claims also carry controversy with them.

I had written on icy slip and fall injuries over the years.  Employee (often truckers) slips and falls on ice or black ice (even worse) can cause heavy duty injuries to employees.   Six of the worst leg injuries I have ever seen come from truckers falling when getting in or out of trucks.    Black ice can be treacherous if the parking lot or roads have been scraped and/or sanded/salted and then refreezing.

That is exactly why this article did not post last Thursday and the newsletter did not go out to my faithful readers.  Driving on refrozen ice that is similar to glass was something I decided to avoid.   Why? – because when I went to check the road conditions in front of my house, I fell over like a freshly chopped tree.   I had no injuries.   I stayed home.

I violated the slick-bottom shoe rule and payed for it.

This all occurred after the road was treated for ice.  However, there was a snow pack that I wish was left as it gives traction until it melts.

I digress – According to a great article by EHS, Accident Fund and American Heartland – 29 to 37% of injuries are caused by ice slip and falls (including me LOL).  Safety tips for employees on ice are also included in the article.

Winter-related slips and falls claims doubled in 2013-2014 over the previous year, representing 29 percent of all workers’ compensation claims, according to Accident Fund Insurance Company of America and United Heartland.

Here’s the breakdown by states:

One hidden number is the seriousness of the claims reported.   A fracture knee cap or dislocated shoulder results in very serious workers comp claims.

One specific area for serious workers comp claims concerns states that are not used to such weather such as the Southeastern US.  If one does not expect to have this weather by living in the south, the level of safety may not be that great.

One controversial area with ice-related claims are the ingress and egress (going and coming) rules.   Each state has their own set of rules and laws on when a person becomes an employee – the old parking lot rules determine the employment situation for these serious workers comp claims.

The Ingress Egress rules are confusing and controversial in North Carolina. Ingress-Egress is one of the most confounding sets of rules that employers, injured employees, adjusters, and WC courts face very often.  Ingress- Egress is sometimes also referred to as the “going and coming” rules.

The ingress and egress rules are also referred to as the “parking lot rules.”   The debate seems to start when a First Report of Injury is received in a claims department where an injured employee slips and falls on a sidewalk or parking lot.

What happens if an employee is in a vehicular mishap:

These will not be completely covered in this article, however, these are the questions company owners, risk managers, adjusters, and others in the WC industry should be asking themselves now, instead of post-accident.

A recent North Carolina Court of Appeals decision shows how complicated an ingress/egress or employee travel case can be when looking at all the facts.   You may have to register to read the article (sorry for the inconvenience).

The bottom line is to know your state’s ingress-egress rules now even if they may be inconsistent.

Snow and Ice injuries can cause  a large amount of WC claim headaches.

Last night, the temperature in many parts of the southeast US approached zero degrees with a blanket of ice and snow to make things even colder.  Many news reports from Atlanta showed what can happen with just two inches of snow that melted and refroze to greet drivers on their way home.

Black ice can be daunting as the road, parking lot or sidewalk can seem to be melted or clear of any ice.  Drivers in the southeast can easily speak to these conditions over the last few days.   Colder climes are usually prepared for such ice and snow storms.

Some of the worst injuries that start as innocuous slip and falls can turn out to be very expensive WC claims. One of the most trying injuries for WC claim staffs are the slip and falls in the parking lots.   The ingress-and-egress rules are very dissimilar for each state.

One WC court case can change how adjusters handle these claims.   Each state is to its own on these rules and laws.   The following are three great resources on preventing ice/snow slip and fall injuries.  One even has a payroll envelope stuffer.    They are:

The most severe injuries that I have seen lately on snow/ice injuries are truckers that slip and fall when getting out of the truck.  One claim resulted in four knee operations with the claim ending with a Permanent Total disability rating with lifetime benefits. That one is here in my office as I write this article.

There are many articles on trucking safety on snow/ice.   One interesting note is none of the articles such as this one from the American Trucking Association mentions getting in and out of the trucks during icy conditions.

An interesting fact is that heatstroke accounts for the most weather-related injuries and not injuries involving cold weather.